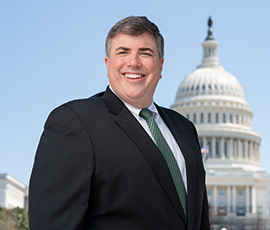 David James joined the U.S. Travel Association in the fall of 2021 and serves as the organization’s vice president of media relations.

James serves as a primary point of contact for news media and executes the association’s external communications efforts. He holds a high degree of political, government, and crisis communications experience on Capitol Hill, in federal agencies, and on successful campaigns for President, the U.S. Senate, the U.S. House of Representatives, and several state-level campaigns. He has also served as a Senate-confirmed Assistant Secretary of Labor and in other management positions in the federal government, most recently at the U.S. Department of Transportation. With vast experience in over fifty media markets, he has been quoted by major national and regional news outlets.

Prior to his entry into the campaign and public service sectors, James started his career in the travel industry on the opening staff of the Ritz-Carlton Hotel in St. Louis, Missouri, where he served in a variety of frontline roles during its first five years of operation.