After edging down in December, travel employment rebounded last month to reach a new record of 8.2 million total U.S. jobs.

Today’s Labor Department employment report revealed that U.S. unemployment dipped to an eight-year low of 4.9 percent in January—and according to analysis by economists at the U.S. Travel Association, the travel industry added 9,000 jobs to reach a new record of 8.2 million total U.S. jobs. 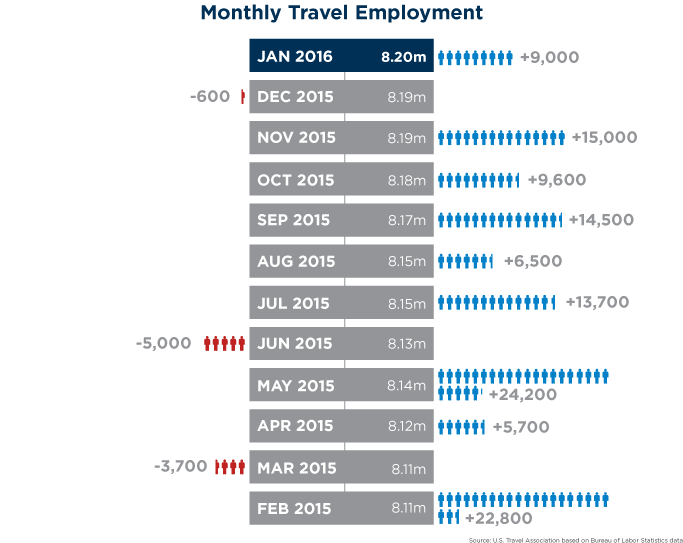 After edging down in December, travel employment rebounded last month to reach this record. Overall, the travel industry has been a consistent job creator for the U.S. economy, adding new jobs in 25 out of the last 30 months.

Still, the overall pace of travel job creation over the past year has been slower in than earlier in the recovery.

This slowdown has been likely due to the ebb in overall spending by international travelers in the U.S., caused by the strong dollar. Backing up this thinking: today’s December international trade report from the Commerce Department, which confirms that international traveler spending in the U.S. edged up only 0.8 percent last year. While this compares favorably with the overall 4.8 percent decline in total U.S. exports last year, it is nonetheless a major slowdown from the 8.2 percent average rate of travel export growth during the prior four years.

The fact that travel has continued to create jobs throughout the past year can mainly be attributed to domestic leisure travel, which grew faster in 2015 thanks to factors such as lower gasoline prices, higher wages and an improving labor market. The latest Travel Trends Index signals that these trends in the U.S. will likely continue into the first half of 2016, leading to continued job creation in the travel industry.

For more information about U.S. Travel, please contact us at: