Kathleen Matthews, the former chief global communications and public affairs officer at Marriott International, received a distinguished leadership award from the U.S. Travel Association in appreciation of her contributions to travel and tourism, promotion of sustainability, and support of diversity and inclusion in the industry. 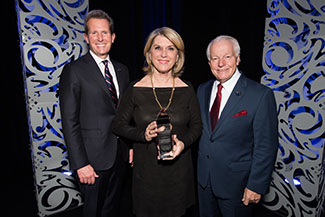 Matthews joined Marriott in 2006 after spending 30 years at Washington, D.C.’s ABC affiliate, WJLA, where she was an anchor for 15 years. During her tenure, Marriott launched its Global Green Council and began building LEED-certified hotels as part of its new sustainability strategy, and Matthews led an effort in China to help conserve that country’s water resources.

Matthews forged partnerships with organizations like the Human Rights Campaign, and launched job training programs in the U.S., as well as in countries such as Rwanda, India and Haiti to provide a pathway to hospitality careers for disadvantaged youth.

Matthews shared her expertise on a national and global scale through her service on the U.S. Department of Commerce Travel and Tourism Advisory Board and on the World Economic Forum’s Global Agenda Council on Travel and Tourism. She also served on U.S. Travel’s board and its executive committee, and moderated U.S. Travel’s Secure Tourism Summit in 2017.

In 2015, Matthews left Marriott to pursue a career in public service, and now serves as the chair of the Maryland Democratic Party.

“Kathleen’s work made a lasting, positive impact on both Marriott and the travel industry as a whole, and I’m proud to be able to call her a close friend,” said U.S. Travel President and CEO Roger Dow.

U.S. Travel presented the award to Matthews during the association’s fall Board of Directors dinner.

Previous recipients of U.S. Travel distinguished honors include Florida Governor Rick Scott and Tom Nides, former deputy secretary for management and resources at the U.S. Department of State, who was recognized with the department’s consular officers.