Ads at Reagan National Airport in Washington, D.C. introduce the association's policy priorities and agenda to a new Congress and administration.

"Travel. More than fun. Serious business." After a year of sharing that message up and down the campaign trail, the U.S. Travel Association continued its election-year industry positioning campaign this week at Ronald Reagan Washington National Airport (DCA).

Ads debuted that tout the association's pro-connectivity, pro-growth, pro-traveler policy priorities—with the express intention that they be seen by members of the new administration and Congress traveling to the nation's capital.

Messaging about travel's importance will appear in various airport terminals from November through January.

A backlit ad appearing near a TSA checkpoint emphasizes U.S. Travel's efforts to improve travel while easing and securing the process. It is in place as of November 7, and will run through January 29, 2017. 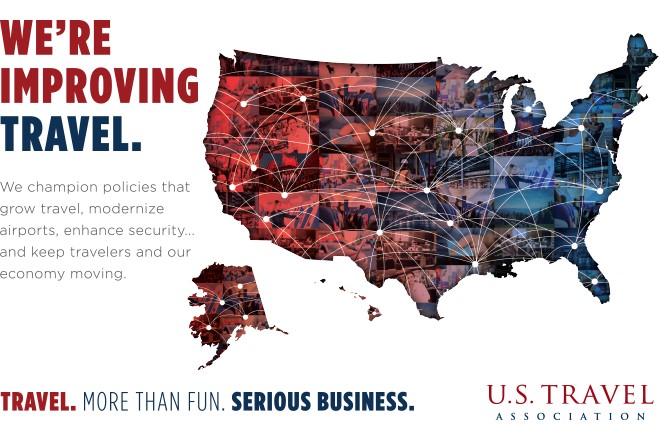 Ahead of the opening of a new Congress and the presidential inauguration, ads with this messaging will also appear in a terminal exit walkway from January 2-29.

"The election may be over, but our work has just begun," said U.S. Travel Association President and CEO Roger Dow. "New and returning lawmakers arriving here need to know how crucial our industry is for America's health, wealth and diplomatic relations as they begin their work for the coming years. Our industry looks forward to working with the Trump administration on policies that will keep travelers moving and keep our country a welcoming destination—and in doing so, create jobs and help fulfill the very campaign promises they made en route to Washington."

Learn more about the economic impact of travel in each state, and on the U.S. as a whole at ustravel.org.