Todd Davidson, president and CEO of Travel Oregon, and Spurgeon Richardson, the former longtime president of the Atlanta Convention & Visitors Bureau, were inducted into the U.S. Travel Association’s Hall of Leaders Tuesday night. 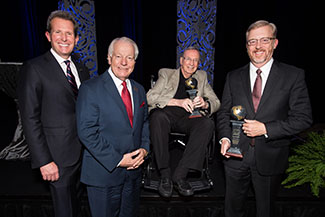 Induction into the Hall of Leaders is the highest honor bestowed by U.S. Travel and one of the greatest recognitions an individual in the travel and tourism industry can receive. Honorees are industry pioneers whose vision and leadership have strengthened and unified the industry well beyond their own organizations, and whose contributions have a lasting impact.

“Todd and Spurge are innovative, principled leaders who for decades have demonstrated a deep understanding of the future of travel and its ability to bring together people of all backgrounds,” said U.S. Travel President and CEO Roger Dow. “Whether it’s looking across oceans to potential international markets, or ensuring that people of all origins feel welcome in their destinations, Todd and Spurge are trailblazers who have profoundly shaped this industry.”

Davidson was appointed executive director of Travel Oregon in 1996 and was named its chief executive officer in 2004. Under his leadership, travel and tourism in Oregon grew into an $11.3 billion industry, and the organization’s marketing—particularly its international efforts—have been recognized with dozens of awards. Davidson was named State Tourism Director of the Year in 2006.

Davidson is a past chair of the U.S. Travel board of directors and the U.S. Department of Commerce Travel and Tourism Advisory Board, and in 2016, the U.S. Secretary of Transportation appointed Davidson to serve on the National Advisory Committee on Travel and Tourism Infrastructure.

“Todd’s creative, enterprising vision exemplifies the vital role that DMOs play not just in travel promotion, but as leaders in economic development and the creation of a community identity,” said Dow.

Richardson served as marketing director and then president and CEO of Six Flags Over Georgia from 1968 to 1991, and then served 17 years as president and CEO of the Atlanta CVB. Richardson was critical to the success of the 1996 Olympic Games held in Atlanta, and led the industry by developing forward-thinking and inclusive initiatives: Atlanta was one of the first CVBs to develop a cultural tourism department, launch a destination website, begin a diversity marketing program and start a charitable foundation.

“Spurge’s innovation in the areas of technology and diversity set the standard for the industry,” said Dow. “Many initiatives that he created from scratch are now de rigeur practice for most if not all DMOs in the United States.”

With these inductions, 98 individuals have now joined the U.S. Travel Hall of Leaders since it was established in 1969. The 2017 inductees were Arne Sorensen, president and CEO of Marriott International, and Randy Smith, co-founder and chairman of data and analytics firm STR.