International inbound travel growth continues to avoid an outright decline, remaining in positive territory in March 2017—but the sector’s more modest growth compared with the same period a year before underscores a projected slowdown in the months ahead, according to the U.S. Travel Association’s Travel Trends Index (TTI).

Numerous reports have held that international travel to the U.S. has measurably declined as a direct result of President Donald Trump’s executive orders on visas and immigration, the first of which was issued on January 27. However, U.S. Travel economists urge caution, both because the strong dollar, coupled with a weakening global economy, was already having an impact and because any effects of the executive orders could not have shown up in economic data instantaneously.

Because of lag times between searches for international travel to the U.S. and actual trips—56.9 days on average, according to data provided to U.S. Travel by the research firm ADARA—any fallout from the Trump executive orders would begin to be captured in April travel data.

Therefore, the most comprehensive measurement of the executive order’s effects to date will be offered by the Travel Trends Index due to be released on June 6.

“Think about it: practically no one who travels internationally books a trip, then gets on a plane the next day,” said U.S. Travel Senior Vice President for Research David Huether. “It takes nearly two full months for the average traveler to search for a trip online, book it, then actually travel. 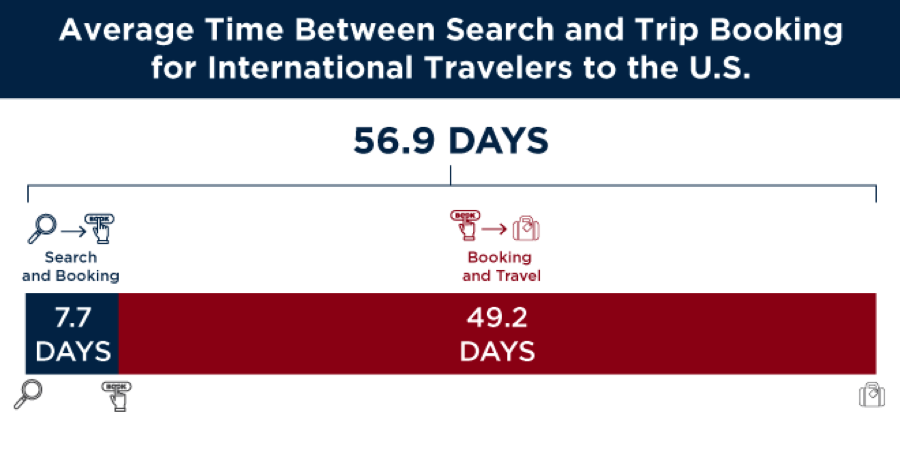 Added Huether: “The June TTI will be one to watch because it will give us that April data, two months after the first executive order.”

Overall, travel to and within the U.S. grew at a faster year-over-year rate in March 2017 than in February 2017. Domestic travel posted strong growth, with business travel growth notably surpassing leisure travel, thanks in part to the timing of holidays like Easter and Passover this year.

As with many economic indicators, a TTI reading of 50 or more indicates positive growth, while a reading below 50 indicates decline. International inbound travel’s Current Travel Index (CTI) reading of 50.2 shows that the sector grew in March, albeit at a much slower year-over-year pace than in previous months. 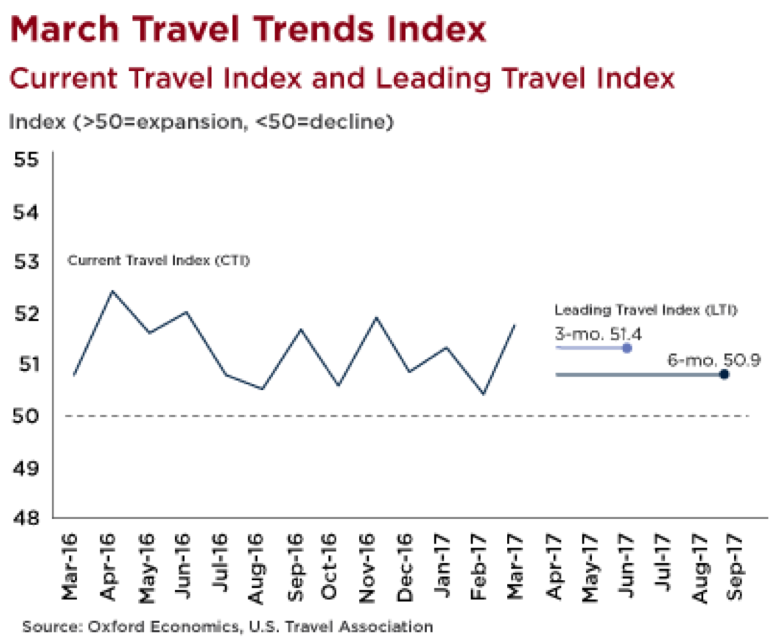 The U.S. Travel Association developed the TTI in partnership with Oxford Economics, and draws from multiple data sources to develop these monthly readings. In order to compile both the CTI and LTI readings, the organization's research team utilizes multiple unique non-personally identifiable data sets, including:


U.S. Travel Association is the national, non-profit organization representing all components of the travel industry that generates $2.5 trillion in economic output and supports 15.7 million jobs. U.S. Travel's mission is to increase travel to and within the United States. Visit ustravel.org.