In first TTI to measure effects of executive order on immigration, visits to the U.S. grew in April

In fact, international travel grew by about four percent year-over-year in April.

Because the average international visitor embarks on a trip to the U.S. 56.9 days after their initial travel search, any fallout from President Trump’s controversial orders in January and February 2017 would only begin to register in April travel data.

“Are we surprised by this data? The honest answer is yes,” said U.S. Travel Association President and CEO Roger Dow. “There have been many claims that the administration’s actions on travel have tarnished America’s brand abroad, but we’re seeing hard economic evidence of the U.S. travel sector’s remarkable resilience.

“Even though we’re encouraged by these strong figures, we'll continue to urge the administration to more publicly send the message that while the U.S. is closed to terror, it remains open for business. We should not take it for granted that this trend will sustain, and the 15.3 million American jobs that depend on travel are not worth putting at risk. A simple and clear welcome message will go a long way in that regard.”

Dow pointed to remarks by U.S. Commerce Secretary Wilbur Ross at U.S. Travel's IPW trade show Tuesday as evidence that the administration well understands the importance of international travel to the U.S., and the role that it plays in boosting the American economy, growing exports and supporting jobs.

Despite strong international travel growth in April, travel overall grew at a slower year-over-year rate in April 2017 than in March 2017. Domestic leisure travel growth remained strong, while domestic business travel growth tapered, due in part to the timing of holidays like Easter and Passover this year.

As with many economic indicators, a TTI reading of 50 or more indicates positive growth, while a reading below 50 indicates decline. 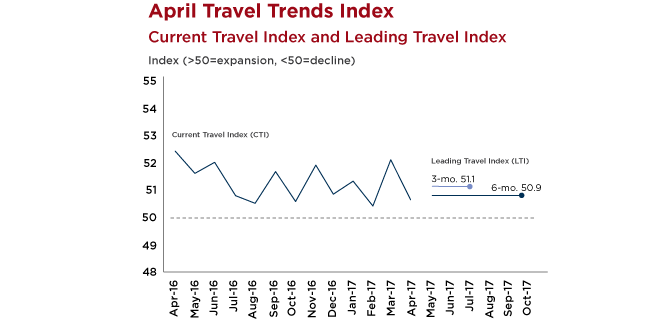 The U.S. Travel Association developed the TTI in partnership with Oxford Economics, and draws from multiple data sources to develop these monthly readings. In order to compile both the CTI and LTI readings, the organization's research team utilizes multiple unique non-personally identifiable data sets, including: