May is Asian American and Pacific Islander (AAPI) Heritage Month—an important opportunity to amplify and appreciate the accomplishments of the AAPI community throughout America.

Here at U.S. Travel, we are taking this opportunity to highlight members of the AAPI community who have shown immense leadership in the travel and tourism industry—including our very own Manager of Executive Operations, Siming Cao.

Siming shared her experience growing up as an only child in Beijing, her journey to the U.S. working at Disney and how she’s passing along Chinese culture and traditions to her children. 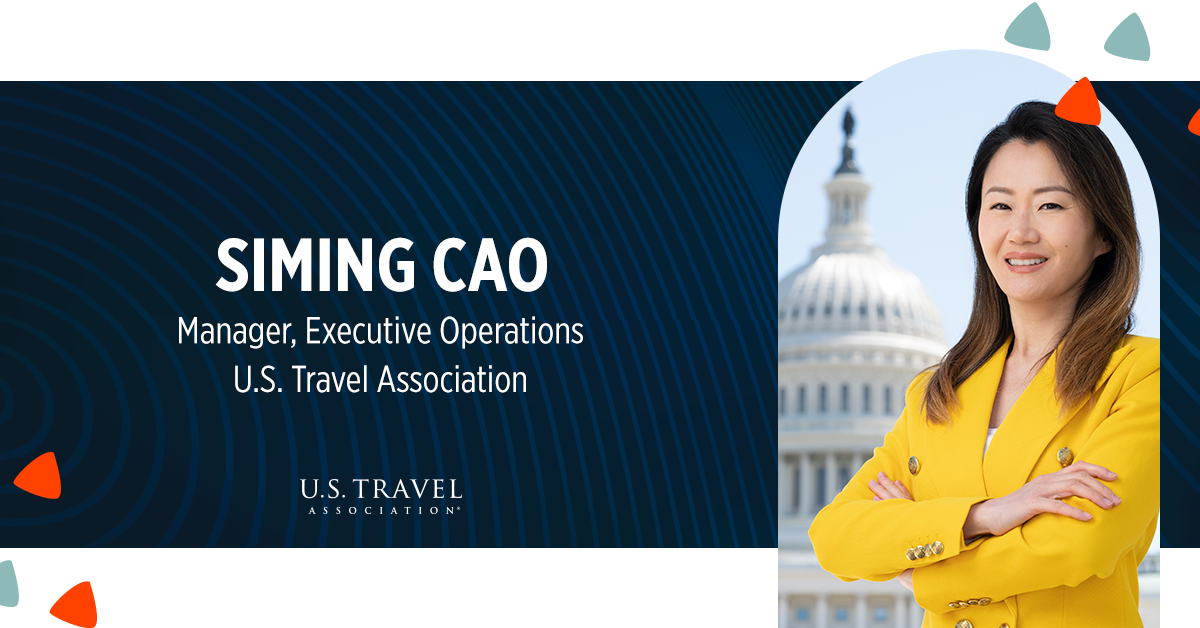 Can you tell us more about your childhood and growing up in China?

I was born in Beijing, the capital of China, where I was an only child. There was a one child policy implemented in China between 1980 and 2015—and I would say that my upbringing was very common by Asian culture standards. My parents emphasized discipline and they were very strict. To give you an example, I remember when I was in middle school, my mom banned me from watching TV until I got straight As. It might sound a little bit extreme, but I am very grateful for what you might call her ‘tough love’ because it’s really helped me develop some of the habits that are so important in life—as a colleague and a parent.

How did the travel and tourism industry play a role at the beginning of your career in the U.S.?

It’s still surreal to think about how I arrived to the U.S. I have an aunt who recently retired and currently lives in McLean, Virginia. I remember when I was in college, I would talk to her regularly and ask her all kinds of questions about America. I thought it would be so amazing to visit sometime. But in the 1990s, it was very difficult for Chinese students to get a tourist visa to come to the U.S. One day, my university announced a program sponsored by Disney World that offered college students the opportunity to apply for a cultural exchange program at Disney World. In my mind, this was my only shot to come to the U.S. anytime soon. After the interview, I waited and waited—until one day I was told to go to the principal’s office where the principal told me that I had been accepted. On top of that, I was told to pack my suitcase and come to Orlando in just three weeks. That was a surreal moment for me, and I remember that evening, I was using a calling card and made an international call to my aunt and shared the good news. And just a few weeks later in April 2005, I landed at the Orlando airport.

I worked as a cultural representative at the China Pavilion at EPCOT. My job was to greet and interact with guests from all over the world while sharing Chinese culture. I also helped the General Manager at the time coordinate and schedule performance activities in the pavilion. It was a great experience for me, and I truly enjoyed it. My roommates were from five different countries so, for me, I had an opportunity to be able to learn five other traditions and just get to know so many different people. It was a good experience.

After working at EPCOT, where did your career take you before U.S. Travel?

After I completed the program with Disney, I decided to move to D.C. where I could be closer to my aunt and her family. I’m not going to lie, there were definitely times where I wanted to go back to China, but one of the things I learned is trust my gut. In moments of uncertainty, I tried to go back to the very beginning of this journey and my desire to come to the U.S. I was fueled by my vision of a life here. In a sense, that vision became my north star—helping me to find myself whenever I had doubts about the direction my life had taken. Soon after arriving in D.C., I took a course at Georgetown University and then worked in a boutique law firm as an office manager for three years.

Soon after, the stars aligned for me—and the industry that brought me to the U.S. became my full-time career, and an industry that I’ve worked in for a decade. It’s been a journey, but I’m proud.

What are some challenges and adversity that you’ve had to overcome being an Asian-American?

I’m fortunate that I haven’t experienced any incidents as anti-Asian hate crimes have surged, but I know that a couple of my friends have had bad experiences. I feel like the AAPI community has come into its own—staking its claim in America. Parents are having tough conversations with their young children or elderly adults about race. Friends are opening up for the very first time and sharing their experiences of growing up as an Asian-American. It’s really powerful to see people advocating for the AAPI community. Last year, U.S. Travel hosted an AAPI webinar—which created a space where we could have an open dialogue about what’s happening in our community. Being part of the AAPI community myself, and having young Asian-American kids, I’m just very excited to see how our community continues to strengthen the greater American society of which we’re all a part.

What do you do within your own family to teach and preserve Asian culture?

I will do what I can to hold on to our traditions and continuously introduce those traditions and values to my kids. Although they speak in Chinese sometimes, I know they eventually will feel less connected to my heritage, and I think that’s okay. They may never quite understand what it was like for me and the many other Chinese people who came to America on their own over the last few decades to start a new life, but they are inheritors of that journey and they will carry on that legacy inside them. I imagine one day they will look back and realize how much of those stories and traditions are integrated into who they are, and will help to inform their understanding of being American.