Traveling this holiday weekend? You and everyone else, it might seem.

A record 17.5 million passengers are expected to fly over the long weekend—an average of 95,000 more passengers per day than last year. The roads will be just as crowded: mobility analytics company INRIX projects drive times across the country will take 10% longer, spiking as much as 85% to 115% in major metro areas.

With more people than ever taking to the skies and hitting the roads, it is crucial that America’s travel infrastructure is well-maintained: our airports, highways, and national parks and monuments are all in need of attention.

Air travel infrastructure
By 2025, more than one billion passengers will fly to and within the U.S. every year. America’s airports must be equipped to handle this influx of passengers.

The current state of America’s airports does not bode well for the future. While America’s airports are among the world’s busiest, no U.S. airport cracks the top 30 if the world’s best airports. If nothing is done to improve and modernize America’s air travel infrastructure, the U.S. economy stands to lose billions of dollars in travel spending. In 2016 alone, Americans avoided 32 million trips due to airport hassles, costing $24 billion in travel spending.

A simple way to fix air travel in America would be to raise the Passenger Facility Charge cap, which gives airports the option to adjust their own user fees to fund infrastructure improvements. The cap was last raised to its current level of $4.50 in 2000; in those nearly 20 years, its purchasing power diminished by more than 50% due to inflation. Increasing the PFC cap would allow airports to fund projects that enhance security, reduce congestion and facilitate greater airline competition—all to the benefit of travelers and the economy.

U.S. Travel hopes to soon see a bill introduced in Congress that will allow for an increase in the PFC cap.

Surface infrastructure
Americans avoided an estimated 47.5 million auto trips due to highway congestion in 2018—costing the economy $30 billion in travel spending and 248,000 American jobs, according to a U.S. Travel study. Worryingly, INRIX’s holiday prediction of congested roads may soon become a daily reality if nothing is done to improve the state of America’s highways.

But there are ways to fix America’s traffic woes. The survey found that two-thirds of auto travelers said they would rather pay an additional $2-$3 each way to fund transportation projects than sit for an additional 1.5 to 2.0 hours in traffic each way. U.S. Travel outlined a number of fixes in its Infrastructure Policy Platform, including the establishment of a National Travel Mobility program, the authorization of a Projects of National and Regional Significance program and investment in infrastructure through user fees.

National parks maintenance backlog
Popular parks such as Utah’s Zion National Park and Arizona’s Grand Canyon National Park are bracing for huge crowds this weekend and encouraging visitors with flexible schedules to consider visiting after the holiday. Visitation to the parks is as strong as ever, but investment in the parks’ infrastructure has failed to keep pace; the National Park Service (NPS) suffers from an $11.9 billion maintenance backlog that has left many of the system’s trails, visitor facilities and roads in disrepair.

In 2018, 318 million visitors to national parks spent $20.2 billion in and around NPS sites, generating a total economic impact of $40.1 billion and supporting 329,000 jobs. Gateway communities across the country rely on well-maintained parks and robust visitation, but the ever-growing deferred maintenance backlog diminishes the visitor experience and throws the parks’ future into uncertainty. It is crucial that Congress supports the Restore Our Parks and Public Lands Act (H.R. 1225) and the Restore Our Parks Act (S. 500) to establish a dedicated source of funding for the national parks and ensure their viability for generations to come.

With the congressional recess coming to an end after the holiday weekend, U.S. Travel will continue its engagement with members of Congress to underscore the economic importance of modern and well-maintained travel infrastructure systems. 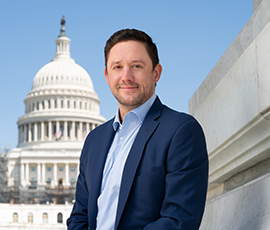