Research Round-Up: Behind Roaring Economy, Effects of Decline in International Visitation to U.S. Begin to Show

Here are some of January 2018’s most compelling findings from the U.S. Travel research team.

According to data from the U.S. Department of Commerce, the U.S. goods and services trade deficit widened to $50.5 billion in November 2017, the largest deficit in nearly six years. Travel exports remained virtually unchanged at $20.3 billion in November 2017. Without the $5.7 billion trade surplus they generated, America’s total goods and services trade deficit would have been 11.5 percent larger during that month.

Despite the relative strength in comparison to overall goods and services exports, travel exports remained behind the early 2017 pace of $20.6 billion—and their consistent softening last year is reflective of the sharp drop in spending by international visitors to the U.S. in 2017* (a trend that the Visit U.S. Coalition aims to reverse).

*A more comprehensive picture of international travel spending in 2017 will be available on February 6, once the Commerce Department releases the numbers for all 12 months of last year. 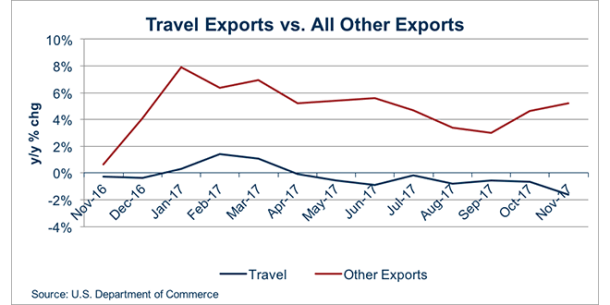 The Conference Board’s Consumer Confidence Index decreased slightly in December, following a record 17-year high achieved in November. This decline was fueled by a somewhat less optimistic outlook among American consumers for business and job prospects in the coming months. Still, consumers’ expectations remain at historic highs, suggesting economic growth will continue in 2018.

Additionally, U.S. consumer sentiment fell more sharply than expected in December, after reaching a ten-year high in October 2017. Confidence in the economy remained high overall, though, likely in response to record stock prices and low unemployment. 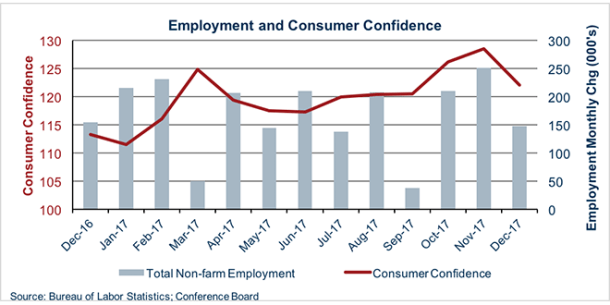 The U.S. economy added more than two million jobs for the seventh year in a row in 2017. The unemployment rate remained low at 4.1 percent. Travel industry employment edged up in December by adding 5,200 jobs, according to the U.S. Travel Association’s estimate based on Labor Department data. 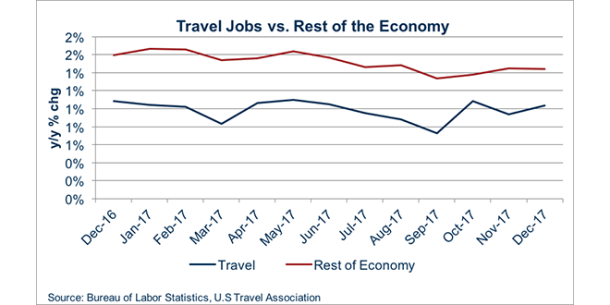