Research Round Up: Eight U.S. Airports Rank in the Top 25 Most Internationally Connected

Here are some of October 2019’s most compelling findings from the U.S. Travel research team.

Fill up on Pump Five
If your destination doesn’t require the use of one of America’s well-connected airports, driving is an affordable alternative.

At just $2.68 per gallon, the average national gas price for September 2019 was 24 cents lower than this time last year, according to the Energy Information Administration. Prices continued to fall in October, registering an average of $2.63 the week of October 14.

“The national gas price average has been gradually decreasing the past three weeks and we expect this trend to continue, barring any major industry or geopolitical events,” said AAA spokesperson Jeanette Casselano,. “Drivers in some states are paying 40 cents less per gallon than they were last October.” 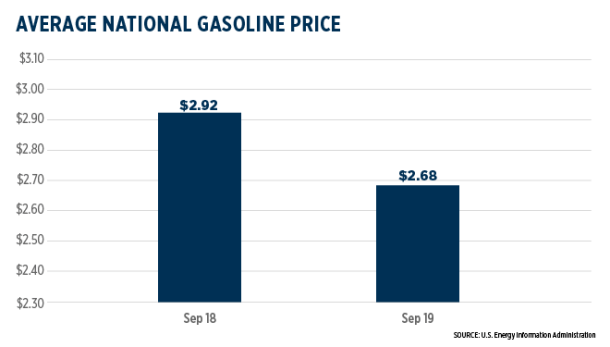 Not-so-Golden Week
One of the most popular weeks for Chinese travel experienced a slowdown this year. Overseas travel during China’s National Day Golden Week (October 1-7) was reportedly down 15% compared to last year, while domestic trips grew nearly 8%.

U.S. Travel Executive Vice President of Public Affairs and Policy Tori Barnes this week told a congressional subcommittee that the U.S. will start feeling the effects of decreased international tourism unless Congress renews Brand USA. In her testimony, Barnes also cited the nearly $7,000 Chinese visitors to the U.S. spend per trip.

A deeper dive into the data and insights available in the October 2019 U.S. Travel Outlook—which includes the latest data on employment, transportation, inflation, consumer confidence and more—is online here.

U.S. Travel Association members receive the full U.S. Travel Outlook, plus a myriad of other cutting-edge data and insights relevant to the travel industry. Learn more about the benefits of becoming a member here—or simply continue to enjoy a small taste of U.S. Travel’s research insight each month here, with the Research Round Up.