Here are some of October 2017’s most compelling findings from the U.S. Travel research team.

The U.S. Labor Department reported that the economy lost 33,000 jobs in September, the first monthly employment decline in seven years. However, the unemployment rate fell to 4.2 percent, from 4.4 percent in August. The travel industry, in particular, experienced significant job loss—19,400 jobs last month.

This employment drop can be attributed to the hurricanes that roared through Florida, Texas, Puerto Rico and other neighboring states and territories in August and September. Carl Tannenbaum, chief economist for Northern Trust, recently noted: “The interruptions created in the hurricane regions were seen in leisure and hospitality especially which had a huge decline.” However, Wall Street analysts do not expect that the impact of these storms will undermine the labor market long-term.

It’s important to note that much of the hurricane-induced job declines in affected areas were due to the fact that many employees in service industries, such as food service and amusement/recreation, were likely off payrolls or otherwise unable to work. This could be because they had evacuated, or because their establishments were not open for business due to power failures and other effects of the hurricanes. 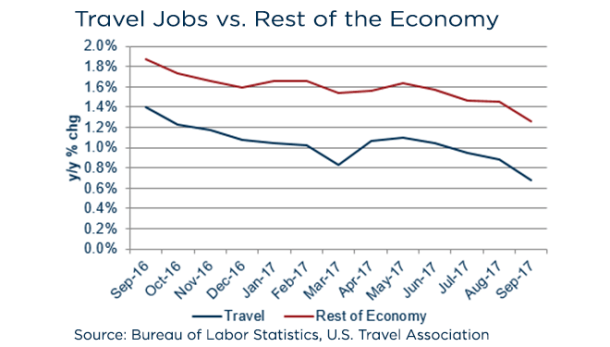 The Conference Board Consumer Confidence Index® declined slightly in September, indicating Americans’ uncertainty about the economy. According to the Conference Board, consumer confidence nationwide decreased slightly last month, but “decreased considerably” in Texas and Florida, the U.S. states most affected by Hurricanes Harvey and Irma.

However, even if Americans’ overall confidence in the economy has flagged recently—especially compared to the surge in August, fueled by the Dow Jones industrial average hitting 22,000—U.S. consumer confidence remains notably higher than any month between 2008 and November 2016. In particular, Americans’ ratings of current economic conditions have remained at or near post-recession highs virtually all year. 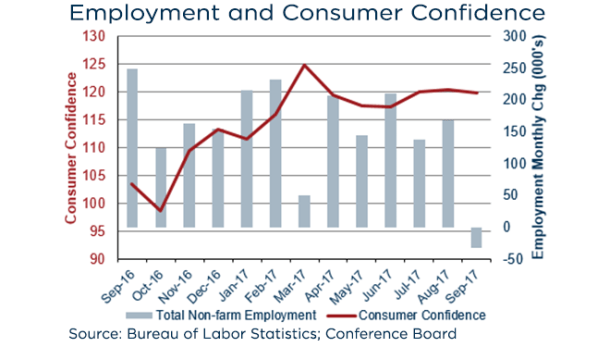 Hurricane Harvey’s impact in August is likely at least partially responsible for weak U.S. consumer spending that month. Additionally, according to Paul Ashworth, U.S. chief economist at Capital Economics, “the September spending figures could remain depressed” due to Hurricane Irma. As expected, these softer spending numbers have also led to less price inflation overall—except in travel.

Gasoline prices increased significantly in September, due to what economists at Berenberg Capital dub a “hurricane boost.” This spike in gas prices also affected U.S. Travel’s Travel Price Index, which saw three percent year-over-year growth in September. According to the index, hotel and motel prices increased by 1.7 percent, while gas prices were up 13 percent. Airfares declined very slightly, by 0.1 percent. 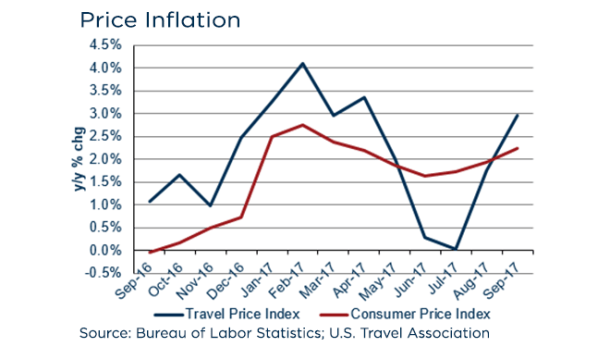