Research Round-Up: The Power of Domestic Trips, Plus International Travel’s Role in the Exports Boom

Here are some of July 2017’s most compelling findings from the U.S. Travel research team.

The Power of Domestic Travel

The June U.S. Travel Barometer reported that nearly 78 percent of U.S. residents searched for lodging within the U.S. in June 2017—a strong indicator of travel intent. This is the highest share since September 2016, but on par with June of last year. Would-be travelers also generally searched in the same regions as June of last year. The Southwest (including Texas, New Mexico and Arizona) and Southeast (which includes Florida, Georgia) saw their search share increase, while the Mideast (which includes New York and Washington, D.C.) and the Far West (which includes California, Alaska and Hawaii) saw their share decline.

According to recently released data, in 2016, domestic travelers spent $836.6 billion in the U.S., representing 84 percent of all travel expenditures. Domestic travel spending directly supported nearly 7.4 million American jobs—and, according to the last few Travel Trends Index reports, is likely to be the main driver of growth for the U.S. travel industry going forward. 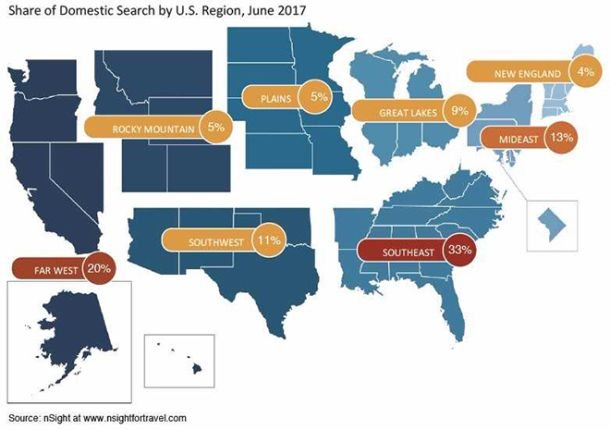 The U.S. trade deficit narrowed in May 2017, as exports rose to their highest level in more than two years, according to Commerce Department data. Travel exports, in particular, increased to $21.4 billion in May 2017, accounting for over 40 percent of the boom in U.S. exports. While travel imports increased slightly, by $0.3 billion, the travel trade surplus remained above $7.1 billion—and good thing, because without it, the total U.S. trade deficit would have been 17 percent larger in 2016.

Driving all this? An acceleration in international visitor spending between February and May 2017, where inbound visitor spending increased at an annual rate of 15.6 percent, the fastest three-month pace in nearly two years. 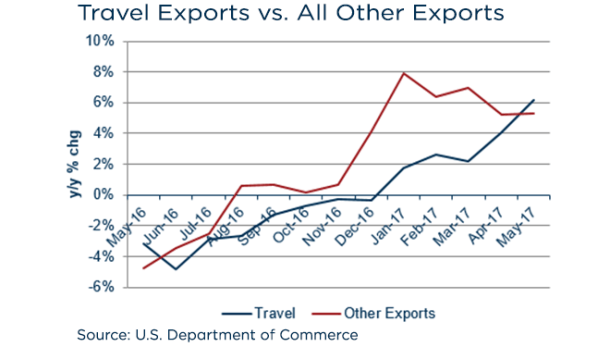 Personal incomes increased 0.4 percent in May 2017, boosting the personal savings rate to its highest level in eight months. However, U.S. consumer spending slowed during that time, according to the Commerce Department, as did inflation.

As such, consumer price inflation remained unchanged in June 2017, according to Labor Department data. This had an effect on travel prices; airfares, in particular, dropped by 2.7 percent in June, while motor fuel prices decreased by 2.8 percent. All of this translated into a 1.3 percent month-over-month decrease in U.S. Travel’s latest Travel Price Index. 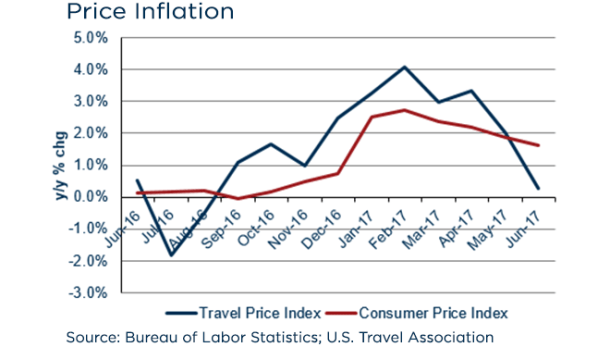