Here are some of September 2018’s most compelling findings from the U.S. Travel research team.

After temporarily suspending the release of its international visitation numbers due to a data collection error at airport kiosks, the Department of Commerce’s National Travel and Tourism Office (NTTO) recently released its revised data. The NTTO announced that the U.S. welcomed nearly 77 million international visitors in 2017, a 0.7 percent increase from 2016. The NTTO also revised its 2016 estimates of overseas visitation to the U.S. to a 1.5 percent decline—slightly greater than the previously published 2.1 percent decline.

Increasingly, Americans are eschewing international travel for destinations closer to home. According to the U.S. Travel Barometer, nearly nine in ten lodging searches from U.S. residents were for travel in the U.S.—an increase from the 80 percent of lodging searches for the previous two Augusts. More than half of U.S. residents searched for lodging in the Far West or Southeast regions.

This apparent inclination to stay closer to home aligns with Phocuswright’s study on the top factors considered when travelers choose a destination. Ease of travel ranked as most important, followed by food and dining and landmarks and sightseeing. Six in 10 travelers visited a destination they had been to before, and more travelers drove to their destinations, with a surge in lower-spend travelers shrinking the share of travelers venturing abroad. 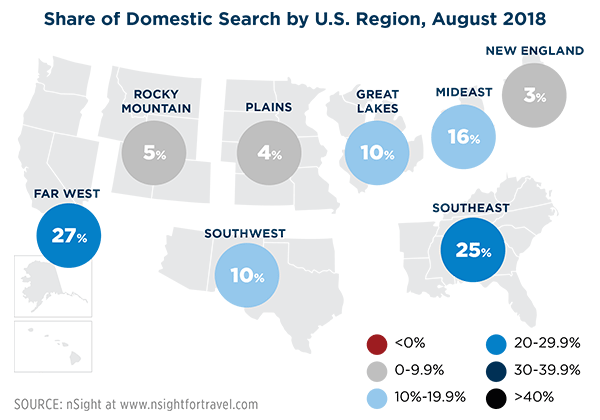 Summer vacation season helped push the U.S. hotel industry in July to its 101st consecutive month of year-over-year of growth in revenue per available room (RevPAR), according to STR. However, July also registered the lowest RevPAR increase since April 2017, increasing only 1.8 percent to $98.17. Occupancy dipped 0.2 percent to 73.6 percent, and average daily rate (ADR) rose two percent to $133.44.

“There was enough supply growth (2.1 percent) to outpace the year-over-year increase in demand (1.9 percent), and that led to the first monthly occupancy decrease in the U.S. since last July,” said Jan Freitag, STR’s senior vice president of lodging insights. 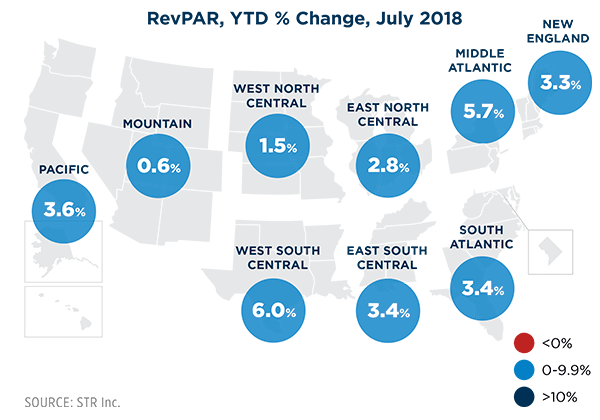 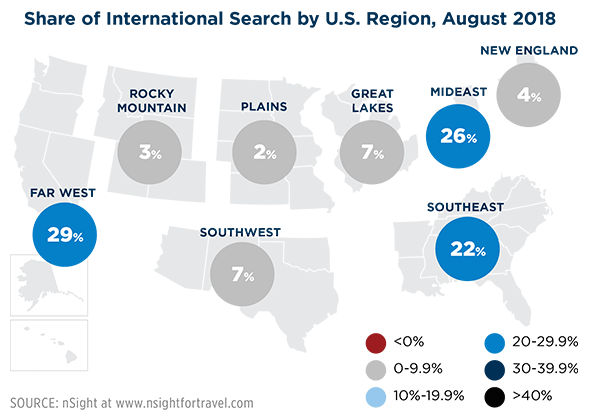 A deeper dive into the data and insights available in the September 2018 U.S. Travel Outlook—which includes the latest data on employment, transportation, inflation, consumer confidence and more—is online here.