Research Round-Up: Travel and the Trade Deficit, Plus U.S. Regions Attracting the Most Interest This Summer

Here’s a sampling of some of June 2017’s most compelling findings from the U.S. Travel Research team.

Travel and the Trade Deficit

International travel is America’s No. 1 service export, and No. 2 export overall. Last year, international visitors spent $246 billion in the U.S., generating an $87 billion travel trade surplus, the highest of any industry. Without this surplus, the total U.S. trade deficit of $502 billion would have been 17 percent larger in 2016.

The U.S. goods and services trade deficit widened by 5.1 percent in April, according to data from the U.S. Department of Commerce. Travel exports, meanwhile, remained flat but stable. Travel exports in the first four months of 2017 were 2.4 percent higher than the first four months of 2016, while overall exports increased by 6.1 percent over the same period. 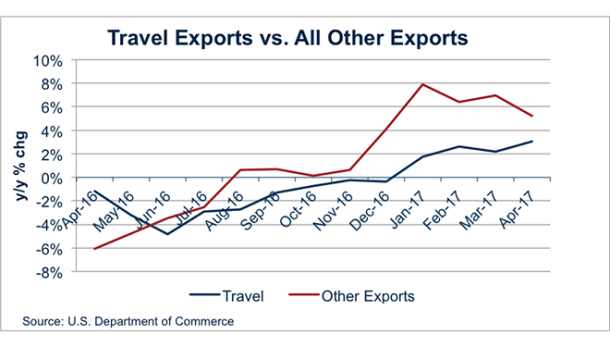 Where in the U.S. Do Americans Want to Travel This Summer?

Summer is in full swing now, and a record number of American travelers may have hit the road during the recent July Fourth weekend holiday. But where were they looking to go?

According to the U.S. Travel Barometer, in May 2017 76 percent of lodging searches by U.S. residents were to locations within the United States. This number is nearly identical to May of last year. The Southeast region of the U.S. (which includes Florida, Georgia and Louisiana) remains the most-searched region by U.S. residents, capturing three in 10 (31 percent) of domestic searches in May 2017. The Southeast region has actually lost market share since last year, though, while the Far West region (which includes California, Hawaii and Alaska) and the Mideast (which includes New York and Washington, D.C.) saw their share increase over May 2016. 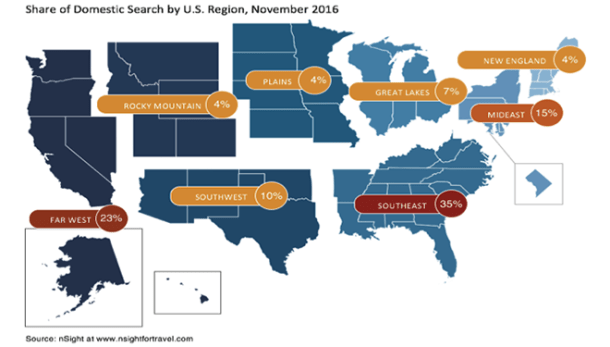 As noted in this month’s Travel Trends Index (TTI), international travel to the U.S. actually grew again in May, despite a strong U.S. dollar, weak global economy and fears that President Trump’s executive orders on immigration have hurt perception of the U.S. abroad. Concurrently, the latest U.S. Travel Barometer shows that in May 2017, the U.S. received 12.9 percent of international lodging searches. This is on par with the U.S. share of searches through the first four months of 2017, and nearly identical to its 12.8 percent share in May 2016, indicating that previously feared declines may not be as bad as projected in the near future.

The Mideast region of the U.S. (which includes New York and Washington, D.C.) remains the top-searched region by international travelers to the U.S., capturing 37 percent of international lodging searches. The region also enjoyed the largest boost in share among all U.S. regions in May—international searches to the Mideast increased 9.1 percent over May 2016. Meanwhile, the Southeast region (which includes Florida, Georgia and Louisiana) lost share year-over-year. 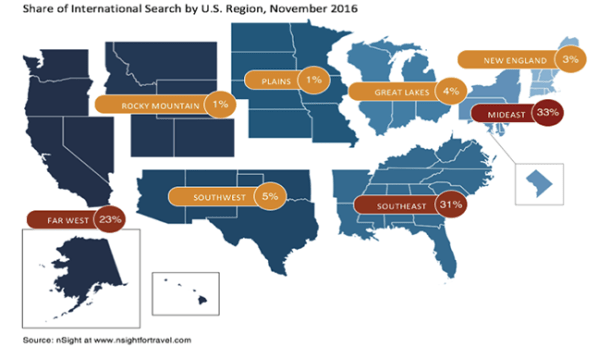