Here are some of March 2018’s most compelling findings from the U.S. Travel research team.

Travel Job Growth v. The Rest of the U.S. Economy

However, while the travel industry has historically added jobs at a much faster rate than the rest of the economy, those other sectors—and indeed the U.S. economy as a whole—are starting to catch up. The recent upturn in job growth overall is likely due in part to the recently passed tax reform legislation, which U.S. Travel expects will provide a healthy boost to business travel this year and next. 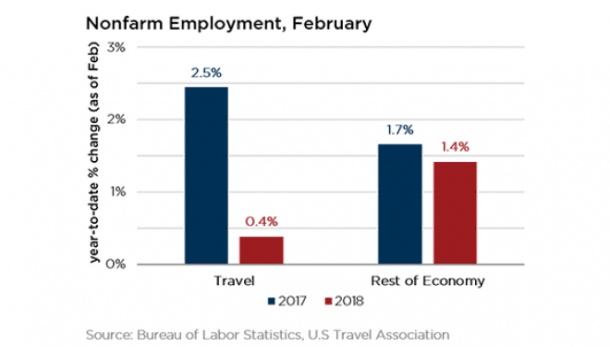 How Do Travel Price Fluctuations Differ from Consumer Prices Overall?

The Labor Department’s Consumer Price Index (CPI) for February showed a cooling down, of sorts, in general consumer prices. Prices increased in February by just 0.2 percent month-over-month, compared to January’s increase of 0.5 percent month-over-month. Economists viewed this generally as a good sign, arguing that wage inflation isn't high enough for continued price inflation to be a good thing. Per a February average hourly earnings report, wage growth in the U.S. remains relatively tame.

Meanwhile, travel price inflation, as measured by U.S. Travel’s Travel Price Index (TPI), edged up just 0.1 percent in February, after a 0.8 percent drop in the price of motor fuel offset mild price increases in food and beverages, recreational services and other travel-related sectors. Year-over-year, the TPI rose by a mild 1.3 percent, which was slower than the increase of 2.2 percent for consumer prices overall in that same period. 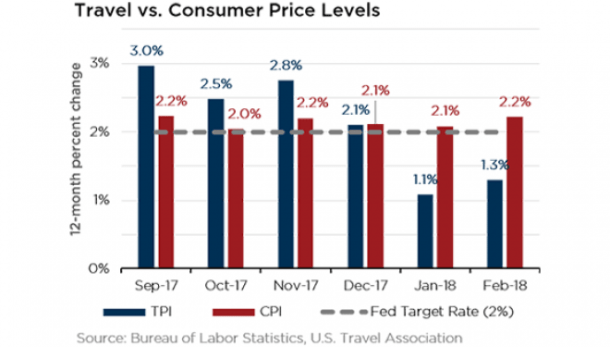 Spring Break Plans? Where Americans Searched for Lodging Within the U.S. in February

The February U.S. Travel Barometer reported that the share of U.S. residents searching for lodging within the U.S. increased yet again to another new high last month. February lodging searches are typically for anticipated travel within the next 30-45 days, falling in the middle of the general spring break time frame—so they’re generally a good indication of where Americans are intending to travel for their spring breaks.

Eighty-eight percent of U.S. residents currently searching for lodging looked within the U.S. in February. This is up from the 2017 year-to-date average of 76 percent, and up significantly from the 77 percent figure in February of last year. The Far West region of the U.S. (which includes California, Alaska, and Hawaii), captured a greater share of searches in February and now represents 28 percent of domestic searches, just behind the Southeast (which includes Florida, Georgia and Louisiana), which captured 30 percent of searches. 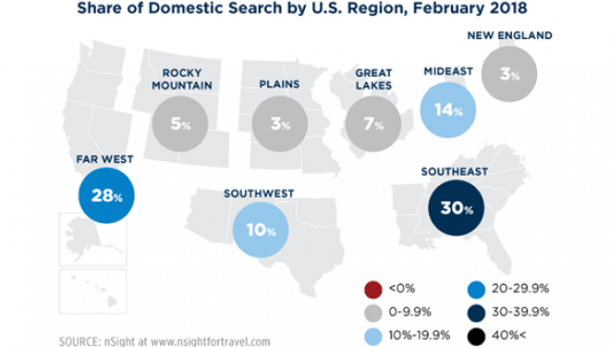