Travel Employment Bounces Back in September

After a precipitous decline in July and a slight rebound in August, travel employment surged by 9,700 jobs in September. The job increases were mainly seen in the amusement, gambling and recreation sector. September’s expansion was above the average rate of employment growth for the year, which has averaged 5,600 jobs per month from January to September of 2019.

Total nonfarm payroll employment rose by 136,000 and the unemployment rate declined to 3.5% in September.

While domestic travel has continued to grow at a solid pace so far this year according to U.S. Travel’s Travel Trends Index, international inbound travel to the U.S.—which accounts for 14% of overall travel spending in the U.S.—has floundered (down 1.7% through the first half of the year), due in part to the high value of the dollar, trade tensions, and a general deceleration of global economic growth. Still, the U.S. is on track to lose even more of its share of the global long-haul travel market for the fourth consecutive year. To keep the U.S. competitive in the global travel market and to help reverse the slide in market share, it is essential for Congress to reauthorize Brand USA this year. 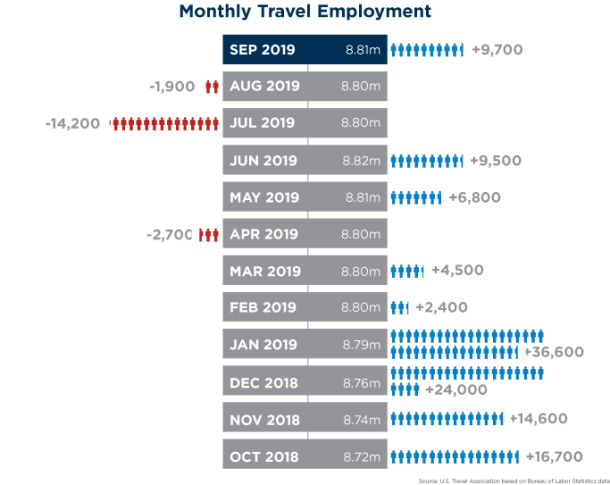