A greater percentage of long-haul visitors are including a national parks stop on their itinerary; NPS centennial push, strong dollar are possible factors

National parks are an increasingly attractive destination for overseas visitors to America, according to a U.S. Travel Association analysis of Commerce Department data.

In 2015, 13.6 million overseas travelers visited national parks and monuments—representing 35.4 percent of all overseas visitors to the U.S., up from 33.4 percent in 2012.

U.S. Travel economists expect the share of international visitors stopping at U.S. national parks during their trips here to steadily increase. The total number of overseas arrivals to the U.S. is expected to reach 40 million in 2017, and the share of these travelers that visit a national park or monument is projected to increase to 36.5 percent. As a result, national parks and monuments will likely receive about 14.6 million overseas travelers in 2017, up 7.3 percent from 2015.

Publicity around the National Park Service's 100th anniversary this year, supported by Brand USA and other organizations, is a likely contributor to the bump. But so, too, is the U.S. dollar’s continued strong performance against other currencies—meaning that as overseas travelers come to the U.S., they are likely looking at more cost-effective destination options.

“Even though a number of factors are exerting downward pressure on inbound travel volume, we continue to see pretty healthy trends in numbers of overseas visitors,” said U.S. Travel Association President and CEO Roger Dow. “There are a number of good theories as to why—one is that many of the country’s prime attractions, like the Grand Canyon or Yellowstone, can’t be replicated just by going to a cheaper country; another is that the U.S. offers world-class activities at the full range of price points, from the tip-top of luxury to the freest of the free. Both of those are born out by the growth we are seeing in international interest in our national parks.” 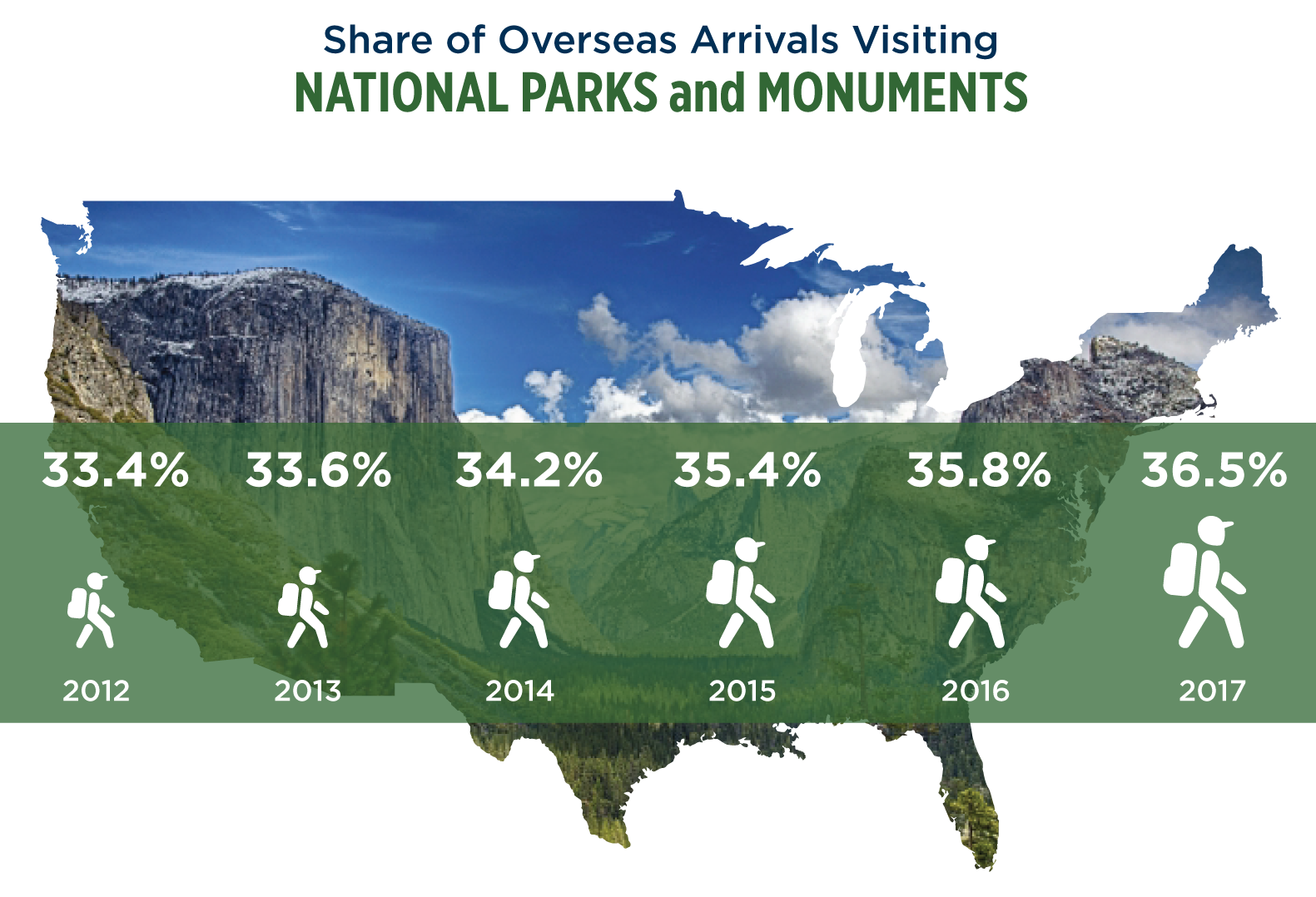 The National Park Service (NPS) reports that visitors to national parks and monuments last year spent a combined total of $16.9 billion during their trips. That spending, which largely occurred in local “gateway regions,” or the communities within 60 miles of a park, supported 295,000 jobs and $11.1 billion in income for American workers. This in turn resulted in $32 billion in economic output for the entire U.S. economy.

Said Dow: "U.S. national parks house some of our country’s most breathtaking natural and cultural treasures. As the U.S. dollar continues its strong run, promoting our national parks and monuments as the world-class attractions they are is imperative to reaching the U.S. government’s official goal of 100 million international visitors to the U.S. by 2021—and for fueling economies in every corner of the nation."