The U.S. Travel Association on Wednesday released a survey finding that Americans avoided an estimated 47.5 million auto trips due to highway congestion in 2018—costing the economy $30 billion in travel spending and 248,000 American jobs, according to the organization’s economists.

Even with record numbers of drivers expected to hit the road for the holiday weekend, the U.S. Travel survey also found that many potential road travelers simply won’t bother—nearly a third avoided at least one day trip and almost a quarter avoided at least one overnight trip last year because of the likelihood of road congestion. Economic modeling based on the survey results calculated the jobs and spending cost numbers.

The survey also found that comfortable majorities of American auto travelers would prefer to pay more in user fees to fund system improvements rather than sit in traffic (see below).

For those that do hit the roads, their destinations will “feel” farther away than ever because of congestion delays, according to maps built by U.S. Travel using data from INRIX “Roadway Analytics." 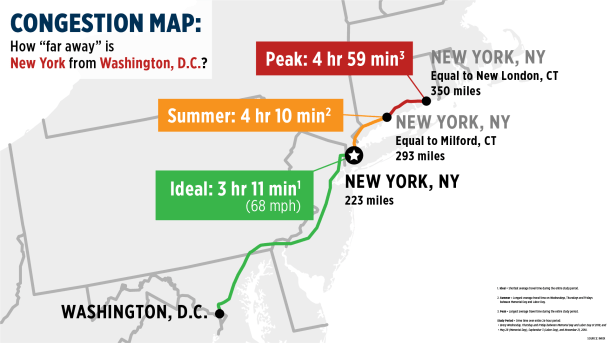 “Heading into Memorial Day and the summer travel season, this suite of research shows that: one, the country is becoming less connected because of strained infrastructure; and two, there is a measurable economic cost to that problem,” said U.S. Travel Association President and CEO Roger Dow.

“The infrastructure discussion tends to grind to a political halt when it turns to resources,” Dow continued, “so we tested the funding question with polling. The interesting thing we found is that Americans are willing to pay more as long as their money is explicitly used to improve transportation in their region.”

How Congress Can Solve the Problem

“Our survey gave travelers a choice: would you rather pay more, or continue to sit in traffic?” said Dow. “Two-thirds said they would rather pay a little more. We hope that gives Congress some encouragement to make difficult decisions, because data shows us that inaction is putting the brakes on connectivity and prosperity.”

The results show that in the time it takes to drive between major U.S. cities during summer and peak hours, Americans could travel hundreds of miles farther if they had the efficient, safe and modern transportation network that our nation deserves.

For example, along the I-95 corridor from Washington, DC to New York, the study found that in the additional drive time necessitated by peak holiday conditions, travelers could drive an additional 127 miles—the equivalent distance to New London, CT.

Each of the routes in the study can be viewed and downloaded by clicking here.