That’s the message in U.S. Travel’s campaign unveiled this week in Las Vegas, ahead of the final presidential debate on October 19.

Ads touting travel’s economic impact will run in McCarran International Airport and Las Vegas taxis until after the debate.

Travel Channel host and U.S. Travel ambassador Samantha Brown voices 15- and 30-second video ads, which will play on monitors above taxi lines and in the taxis themselves.

“You’ve all heard the saying,” says Brown in one ad, “but you know what actually stays in Vegas? Jobs. From getting here to staying here to eating and drinking and everything in between, it all creates jobs and grows the local economy.”

The 30-second in-taxi video ads, which have been placed in 88 percent of Las Vegas taxis, will run October 14-21. A 15-second version debuted in the taxi line on September 23, and will continue through October 20.

A large-format banner ad was also installed in a highly visible location opposite the main taxi line outside McCarran Airport on September 23, and will remain in place until October 20. 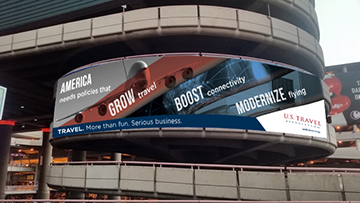 “In this polarized political climate, there’s one thing both sides can agree on: the power of travel for our nation’s economy,” said U.S. Travel Association President and CEO Roger Dow. “The economy is front and center this election, and we’ve heard a lot from both candidates about their plans to create more jobs. Well, travel is the No. 1 employer in the state of Nevada, and supports one in nine jobs across America—so where better to remind all political players of that than Las Vegas, host of the final presidential debate?”

The Las Vegas ads are the latest addition to an industry positioning campaign that U.S. Travel has taken up and down the campaign trail this year, from the primaries to the national party conventions and debates.

Learn more about the positive impact of election-related travel and meetings, and the economic impact of travel in each state at ustravel.org.