Nationwide, in 2016 the travel industry generated $72 billion in local and state tax revenue—enough to pay for the salaries of:

Without these travel-generated revenues, each household would pay $1,250 more in taxes every year.

"Travel is an engine for economic and job growth, and it helps communities maintain a level of service that would require more taxes, had it not been for travel-generated tax revenue," said U.S. Travel Association President and CEO Roger Dow. "Just a one or two percent decline in travel spending can disrupt a state's economy at every level—not just jobs at hotels, attractions and restaurants, but also the income generated to pay for public services like police, firefighters and school teachers." 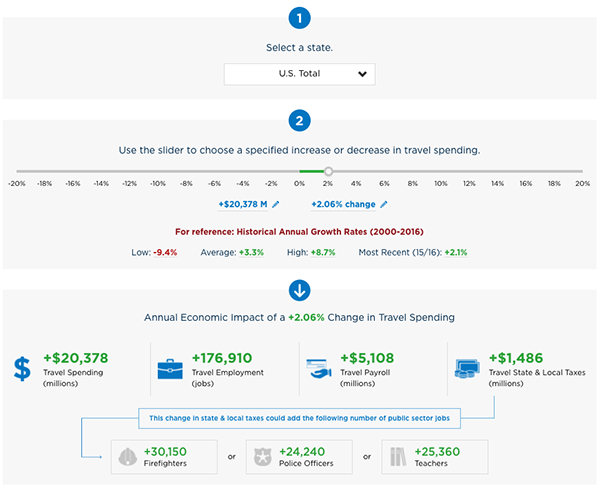 Just as tourism promotion is proven to increase visitors and their spending, the opposite can happen when tourism marketing budgets are slashed.

"Unfortunately, we have seen this scenario play out in states like Washington, Colorado and Pennsylvania, whose legislatures made a misguided decision to cut tourism promotion budgets dramatically and cost their states tens of thousands of jobs as a result," said Dow.

"We're releasing this tool so decision-makers can easily see how small changes in visitation—up or down—can have significant effects for states and communities.

"That's why it's alarming to see state legislatures in Florida and Missouri put forth proposals to dramatically reduce their tourism marketing budgets when the return on investment is so clear. As policymakers are contemplating state tourism promotion budgets this legislative season, we urge them not to make ill-informed decisions that could cause decades of damage."

U.S. Travel has a variety of resources to educate policymakers and key stakeholders of the benefits of travel promotion to a state's economy. Among them is the Power of Travel Promotion report, a tool regularly updated with case studies from states, regions and cities illustrating the power of promotion and the strong benefits to those who invest in it. U.S. Travel plans to unveil the latest version of the report in August at ESTO.